Using the substitution method or reduction method, find the solutions to the following system, where x and y are integers

Elimination method involves multiplying or dividing in a convenient way an equation o both equations with an integer so that by adding up or by making the difference the equations obtained after the multiplication/division, the terms which contain one unknown variables are reduced. The equation is solved, the value obtained for the variable is replaced in one of the eqautions and the value for the other variable is determined. 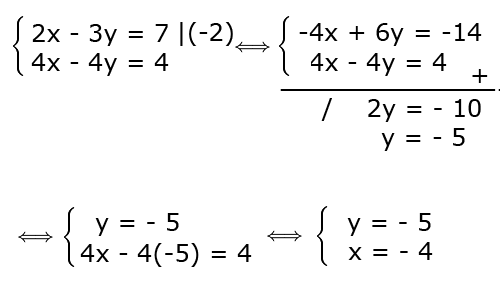 Solution. If we multiply by (-2) the first equation, we can reduce -4x, we add up the equations, we determine y and introduce the obtained value in the second equation and determine x.

Observation. Multiplication with (-2) is not the only method we can use , for example we can multiply the first equation by (-4) and the second by 3 , y is eliminated, but the same result is obtained, the difference between the two methods is only how easy is or not to determine the values for x and y.